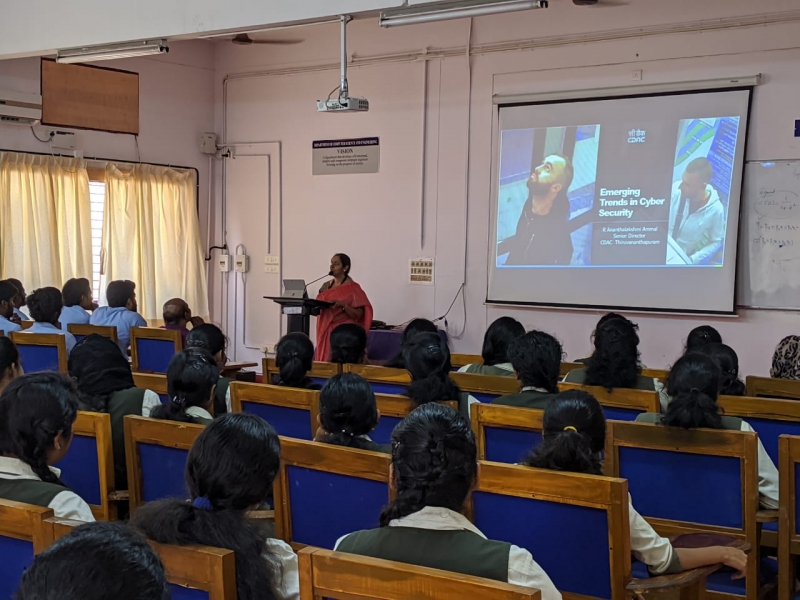 Talk on "Emerging Trends in Cyber Security" on 19th February 2020

Workshop on Artificial Intelligence by Polus Software on 31/08/2019.

Expert talk on Motivation for Opportunities after B.Tech, by Ms. Neelima Krishnan , Software Engineering, Intel Cooperation, US on 22/08/2019.

A three day Workshop on Discrete Structures was conducted from December 2 - 4, 2014. The purpose of the workshop was to prepare the participants for the research expositions.
Classes were handled by experts in the field. Mr. Sajith Pavithran, Associate Professor, LBS, has given expert lecture about Discrete Structures and other sessions were handled by Mrs. Rani Edison, Asst. Professor and Mr. Finny James, Asst. Professor of Mathematics Department from Marian Engineering College.

The Computer Science & Engineering Association 2012-13 was inaugurated by Dr. E. Baburaj, visiting professor of our department on 27/09/2012. The inaugural session was followed by seminar on the topic 'Research a keynote'. The seminar gave an insight to the various aspects of research methodologies.

CS & IT Department has organized a National Seminar on the topic 'Cloud Computing' on 27-02-2013. Mr.Prasanth.N, IAS, Managing Director, KTDC was the chief guest and the speakers were Dr.Kavitha.V from University College of Engineering, Nagercoil and Dr.Elizabeth Sherly from IIITMK, Technopark. Academicians, PG and UG scholars from various colleges have participated in the seminar and presented their papers in the emerging Cloud Computing Technology.

CS & IT department conducted a faculty development programme for two days for members of faculty, staff and M.Tech students on 'LAMP (Linux-Apache-Mysql-PHP) Technology ' on 18th and 19th of December, 2012. Programme was aimed at providing extensive hands-on training on installing, deploying and managing systems and networks under GNU/Linux. Software Engineers from SPACE (Society for Promotion of Alternative Computing and Employment) formed the core team to handle the theory and hands-on sessions.

A five day Faculty Program on practical aspects of 'Operating system and Network Programming' from December 2-6, 2013 was inaugurated by Dr.JJV Jeyasingh, Deputy General Manager, MCAD, VSSC. Mr. Shine S, Asst Prof, CET and Mr.Shibu V S, Asst.Prof, MBT delivered expert lectures during the program. Sessions were also handled by Ms.Vidya K S, Mr. Robert and Ms. Nisha J R of our department. This five day workshop aimed at gathering knowledge regarding the recent technologies in networking. Faculty from other colleges attended the workshop with much anticipation and they could benefit from their course. Along with them, our faculty also attended and could upgrade their level of knowledge regarding the concept.

A National Seminar on 'Big Data Analytics' was conducted on 12 th December 2013 and it was inaugurated by Mr. Sebastian Antony Ukken, Associate Vice President, Nest Technologies and delivered a talk on this topic. Dr.Sivasankar, NIT, Trichi handled the next session.

Mr. Jose Hormese took a session on the topic 'The Preeminent Teachers' for the teachers of the Fatima Convent English Medium School, South Arayathuruthy, Chirayinkeezhu on 13/01/2018 for enhancing their teaching skills and becoming smart and effective.

Mr. Jose Hormese has Co-chaired a session on 19/01/2018 as part of the 5th Biennial International Conference on Emerging trends in Engineering, Science and Technology at the Department of Computer Science and Engineering at Govt. Engineering College, Thrissur.

Mr. Jose Hormese took a session on the 'Power of Positive Thinking, Motivation & Time Management, Prioritizing' for the KCYM Camp - Yuvadeepam 2017 organized by the Kattakada Forane of the Diocese of Neyattinkara at Heera College of Engineering and Technology, Nedumangad on 28/12/2017.

Ms. Nisha J R and Ms.Meera Mathew and attended a 3 day FDP on Security and Forensics in Cyber space: Advances and Future Directions from 19/12/17 to 21/12/17 at The department of Computer Science and Engineering ER &DCI Institute of Technology C- DAC Thiruvananthapuram.

Mr. Jose Hormese was the Resource Person of the Awareness program on Study Skills, Life Skills and Motivation for the High School students of St. Roch's High School, Thope, Thiruvananthauram on 28/09/2017.

Dr. E, Babu Raj attended an FDP on Python Database Integration from 28/06/2017 to 30/06/2017 at Sahrdaya College of Engineering, Trichur conducted by Infosys.

Dr. Sheeja Agustin is the reviewer for the National Conference on Image Processing & Machine Vision (NCIPMV) 2017 conducted by the Department of Computer Science, University of Kerala.

Ms.Merlin Shoerio and Ms. Simi Margaret attended 'Train the Trainer Program on Fundamentals of Python Programming' as part of Infosys Campus Connect at Nehru College of Engineering & Research Centre at Pampady from 14/03/2016 to 16/03/2016. The Sessions were handled by Mr. Hari from Infosys.

Ms. Reeja S L and Ms.Sheeja Agustin attended a seminar on 'Impact of Cloud Computing in IT Industry', organized by Network Systems, Trivandrum on 11th June, 2016.

Ms.Merlin Shoerio and Ms.Mercelin Francis attended a 5-day FEP on 'Mobile Application Development' using android from 20th to 24th June 2016 at Adi Sankara Institute of Engg. & Technology, Kalady as part of Infosys Campus Connect. The Sessions were handled by Mr. Hari from Infosys.

Mr. Jose Hormese, has attended a two day 'Computer Vision' Workshop on 10/11/2016 and 11/11/2016 at the Computer Science and Engineering Department at Govt. Engineering College, Thrissur

Ms.Jyothi Johnson attended a five day Faculty Development Programme on 'Essential Mathematics for Engineering' at Kerala Technical University from 28-11-2016 to 02-12-2016.

Ms. Lekshmi V S attended a seminar on 'Women Entrepreneurship' as part of Women's Day Celebrations at Park Centre, Techno Park on March 8, 2014. She attended a Faculty Development Programme on 'Application Development using Java' from 27-11-2013 to 29-11-2013 organized by Department of Computer Science & Engineering, TKM College of Engineering, Kollam and she also attended a National faculty development program in 'Entrepreneurship' at Techno park from 9-12-2013 to 21-12-2013.

Dr. Sheeja Agustin, was appointed as the Technical Committee member and reviewer for the National Conference on Image Processing & Machine Vision (NCIPMV) 2017, conducted by the Department of Computer Science, University of Kerala

Mr. Jose Hormese, has co-chaired a session on 19/01/2018 as part of the 5th Biennial International Conference on Emerging trends in Engineering Science and Technology at the Department of Computer Science and Engineering at Govt. Engineering College, Thrissur.

Mr. Jose Hormese, has presented a Paper on 'The Christian Contribution to the Development of Church Schools' at the Two Day National Seminar organized by the Christian Study Centre for Cultural and Social Changes under the University of Kerala on March 26 and 27, 2015

Mr. Jose Hormese, Associate Professor in the Department of CSE has got admission for PhD (Part time) at NIT Durgapur.